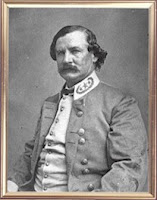 On September 4, 1886 Confederate General Benjamin Franklin Cheatham died. The old general had served during the entire war within the army that was known as the Army of Tennessee. Cheatham rose from brigade to corps commander during the conflict and proved himself a capable commanding officer.Originally a farmer, Cheatham served with distinction during the Mexican War as colonel of the 3rd Tennessee. As the Civil War drew near he was a senior officer in the Tennessee state milita before its eventual merger with Confederate forces. After fighting at Belmont faithfully he led a division at Shiloh where he was wounded. After recovering he was promoted to major general and served in many of the remaining Army of Tennessee campaigns.Cheatham led bravely at the battles of Perryville, Murfreesboro, the Tullahoma Campaign and the fierce fighing at Chickamauga. At all of these places his division was well led and fought the Union armies hard. When General William J. Hardee left the army Cheatham took command of the corps after he led with distinction during the Atlanta Campaign. It is claimed that his troops inflicted more casualites on Sherman's attacking forces than any other Confederate unit that served during the Battle of Kenesaw Mountain. But the biggest test of Cheathams service record was during at Spring Hill, Tennessee during Hood's invasion of the state.Despite his battle performances controversy tended to follow Ben Cheatham everywhere.

He clashed with his superior officers including General Braxton Bragg with whom he fought repeadily. Historians debate feriously about Cheatham's actions near Spring Hill on November 29, 1864. Hood ordered Cheatham to head his invading coloumns but his corps failed to attack the Federals at Spring Hill or block all the escape routes. The Union army was able to slip away during the night and marched unimpeded northward where they entrenched near a town called Franklin. John Bell Hood had a short fuse to begin with and the Union escape enraged him. The two men met the following day and a verbal argument ensued which lasted until Hoods death in 1878. Hood continued to allow Cheatham to be the lead coloumn and at Franklin Cheatham's corps bore the brunt of the fighting. The unit suffered appalling casualties and Cheatham never forgave Hood for the disgrace of attacking an unattainable Union position. General Bragg even entered the fray accusing Cheatham of losing the Confederate initiative at Spring Hill. General Cheatham responded in kind and those two also had another war of words.Two weeks later Hood's army was severly defeated at Nashville and Cheatham retreated with the rest of the army. He would continue to serve with that Army of Tennessee and surrender with General Joseph E. Johnston in North Carolina on April 26, 1865.After the war Cheatham farmed in Coffee County, lost an 1872 congressional race, and served as superintendent of the state prison system. He was postmaster of Nashville at the time of his death on September 4, 1886. He was a interesting character and his record was solid despite conflicts with other army officers.