Forgotten Battles of the Civil War The Battle of Dranesville: December 20, 1861 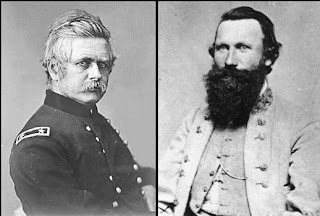 After the battle of First Bull Run both armies sat idle along the Potomac. Union General George McCellan and Confederate General Joseph E. Johnston drilled their men and provided them with the training needed to serve out four years of hardship. Twenty-five miles lay between the two armies. Johnstons men were encamped at Centerville and the Army of Potomac sat at Virginia Hills near Washington D.C. As the ranks of both sides swelled their respective quartermasters complained that more food was needed to feed these huge armies. The armies that “Little Mac” and Joe Johnston led were the largest ever assembled by the Americans, neither knew of the oppositions struggles and both generals sent out forgers to find supplies.

Five days before Christmas both men (without knowing that the other had done so) decided on a lush area of farmland just west of Dransville, Virginia. At daylight on December 20, 1861 the entire wagon train of the Confederate army was on the move to Dransville. With them were four infantry regiments, an artillery battalion, 150 cavalry men and their commander Brigadier General JEB Stuart. At almost the same time, Union Brig. Gen. E.O.C. Ord left the Federal camps with 5 Pennsylvania regiments, four cannon and a squad of cavalry.

Besides numbers the Union forces had the distinct advantage of a shorter distance between their camp and the farm area of Dransville. Therefore, Ord’s men reached the area before Stuart and by 1 p.m the Union general had received word that a sizeable Confederate force had been spotted in the region. Lt. Col. Thomas Kane, the commander of the 1st Pennsylvania Reserve Rifles quickly moved his regiment to a hill that commanded the area. (Known as Drane Hill) Kane men protected the vital intersection between the Leesburg Pike and the Georgetown road. Within moments of moving his men the soldiers under Kane exchanged fire with the Confederates.

In a situation similar to the one faced by Robert E. Lee at Gettysburg (ironically Stuart was involved in that situation too) Stuart hurried his men forward without knowing the total tactical situation surrounding him. Meanwhile, General Ord ordered one regiment and his cavalry to protect the right flank of Kane’s men and deployed his remaining three regiments to the left of the 1st Pennsylvania Reserve Rifles. Both Stuart and Ord set up their artillery and both sides exchanged shells.

Stuart quickly assessed the situation and his trained eye (he also knew the area well) surmised that Drane Hill was the key to the battlefield. Stuarts attacked Kane’s men with the 10th Alabama and the 11th Virginia but the attack failed. Federal artillery kept the rebels in check and soon the field was littered with gray clad Confederates. Moreover, the Federal gunners were able to disable a portion of Stuarts lone artillery battalion and the future Confederate hero knew that if he was going to attack again then it had to be now or never. Stuart ordered another attack and they consisted of the 6th South Carolina and the 10th Alabama. Both regiments were bloodied already but they made the charge gracefully before falling back from the sheets of Northern fire. Their opposition was the 9th Pennsylvania which was a regiment that would go on to be known as the “Bucktails” regiment.

Union reinforcements under Brig. Gen. John F. Reynolds arrived with his first brigade and word reached Stuart that his forces were completely outnumbered. Faced with two failed assaults, Stuart who had already ordered his trains to return to the Confederate army, ordered a withdrawal. The Federals did not contest Stuarts retreat. That night both Ord and Reynolds gathered up the wounded and returned to the Army of the Potomac. The Southerners returned to the battlefield the following morning and buried their dead comrades.

During the two hour firefight, Ord reported his losses as 7 killed, 61 wounded, and none missing; total, 68. Stuart reported 43 killed, 143 wounded, 8 missing; total, 194. The Federal forces must have numbered at least 5,000; the Confederates between 2,000 and 2,500. Although the Federals had less causalities they paid a higher price in officers. One Lt. Colonel and three captains were wounded during the battle.

One of the more interesting stories of this battle was the plight of Confederate Colonel Thomas Taylor who found himself behind enemy lines as this men engaged the Federals. He remained hidden in the brush as he was surrounded by unknowing men in blue. He doggedly found his way back to his regiment during the evening of December 20th and escaped capture. Moreover, despite his defeat General Stuart labeled the Battle of Dransville as “a glorious success” because he was able to save the entire wagon train placed under his charge by Johnston. General Ord easily and correctly asserted that his men had given the Confederates a payback for the loss at Bull Run and won a victory.

Several Federal regiments had "Dranesville, December 20, 1861," painted on their battle flags in gold colors. It would not be the last time that any of the regiments who fought at Dransville would see the smoke of battle.