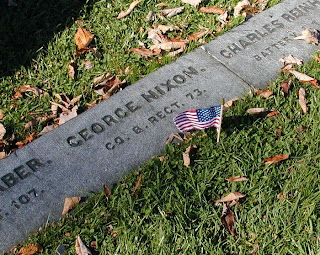 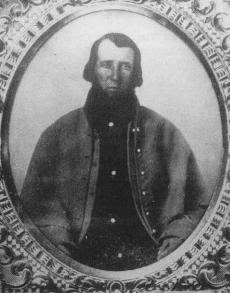 Born in 1821 George Nixon would not achieve the level of importance that his great-grandson would as the 37th President of the United States. He served during the Civil War as a Private in Company B, 73rd Ohio Volunteer Infantry. During the second day of the Battle of Gettysburg (July 2, 1863), he was wounded in the right hip and side during skimishing with the Confederates, and lay in the no-man's land between the Union position on Cemetery Hill and the Rebel's hold on the town. At night his cries of pain were such that it inspired Musician Richard Enderlin to crawl out during the constant firing between the two forces, drag Private Nixon back most of the way, then stand up with the wounded man in tow and dash the final distance to safty. This act won Richard Enderlin a instant promotion to Sergeant, and a Medal of Honor 34 years later. Despite his rescue, Private Nixon's wounds proved to be mortal, and he died in the XI Corps Hospital seven days later. His great-grandson, Richard Millhouse Nixon, would become a president and serve eight years as the nations vice-president. During the Presidential election of 1960 Nixon would also lose one of the most famous elections in American History to John F. Kennedy.

Currently, Nixon's remains lie in the National Soldiers Cemetery at Gettysburg. According to the NPS website Richard Nixon visited his great-grandfathers grave during his tenure as vice-president.

I was born and raised in New York but live in Ohio. Recently I cam across some numbers that stated that Ohio had over 4,400 men serving at Gettysburg. Only Pennsylvania, New York, and Massachusetts had more men on the battlefield. Ohio had men serving in the 2nd, 5th, 11th and 12th Corps, along with the artillery and cavalry corps.
Posted by Mike at 9:45 PM No comments:

Did the Civil War start in CA

WASHINGTON – Nearly two years before the first shots were fired in the Civil War, simmering hostilities over slavery erupted on a "field of honor" in California, where a pro-slavery judge mortally wounded an anti-slavery senator in a duel.

The duel showed how political disagreements over slavery had become increasingly violent, culminating in 1861 when the war broke out.

On Sept. 13, 1859 — 150 years ago Sunday — Sen. David Broderick, D-Calif., and Chief Justice David Terry of the California Supreme Court faced off at 10 paces near the San Francisco-San Mateo County line at Lake Merced. Broderick fired first, but his hair-trigger pistol went off prematurely and the bullet landed in the ground. Terry then fired a bullet into Broderick's chest; Broderick, 39, died a few days later from the wound.

"They have killed me because I was opposed to slavery and a corrupt administration," Broderick said from his deathbed.

The Senate's historian, Don Ritchie, said that as Northerners and Southerners settled in California, the tensions over slavery spilled over into the free state.

Terry was from Kentucky; Broderick was born in Washington, D.C., but his family later moved to New York City. He went to California for the gold rush and wound up making it rich in real estate.

Although the Republican Party had emerged as the national abolitionist political movement, the California Democratic Party had an anti-slavery wing, with Broderick as its chief. This enraged Terry, a pro-slavery Democrat. He leveled a personal attack on Broderick at a political convention, a few months before the fateful duel, that eventually led to their fateful encounter.

Terry charged that the anti-slavery Democrats "have no distinction they are entitled to; they are the followers of one man, the personal chattels of a single individual, whom they are ashamed of. They belong, heart and soul, body and breeches, to David C. Broderick."

Terry mocked them for claiming the support of Sen. Stephen Douglas, an Illinois Democrat who tried to straddle a middle ground on slavery and went on to lose the presidential race to Abraham Lincoln in 1860.

"Perhaps they do sail under the flag of Douglas, but it is the banner of the black Douglass, whose name is Frederick, not Stephen," Terry said to cheers at the convention. Frederick Douglass was a former slave and abolitionist, and invoking his name was meant as a slur, historian Ritchie said.

The next day, Broderick told friends at a San Francisco hotel that he once considered Terry "the only honest man on the Supreme bench, but I take it all back."

This led to a series of notes between the two men, starting with a demand from Terry for a retraction and ending with a challenge from the judge for "satisfaction usual among gentleman." That meant a duel, which Broderick accepted.

California was a "a wide-open world where newspapers carried announcements of upcoming duels as if they were street fairs," wrote Barbara Holland in her 2003 book, "Gentlemen's Blood: A History of Dueling."

Broderick and Terry, who had resigned from the state court, met early in the morning on Sept. 12, but were arrested and brought before a judge in San Francisco. The judge released the men, ruling that while dueling was illegal, an attempt to duel was not, according to David Williams' 1969 book, "David C. Broderick: A Political Portrait." Williams wrote that several of Broderick's friends were disappointed in the ruling.

The next morning, the two men met around 7, drew lots for the pistols and then threw off their overcoats as dozens of people watched.

"Mr. Broderick seemed a little nervous, and as he received his pistol, gripped it with a convulsive grip," reported the San Francisco Bulletin, adding that the senator's nervousness "was the result not of fear, but of intense resolution, or, perhaps, deadly hate. Judge Terry, meanwhile, stood erect, without a wink or a motion, like a man accustomed to such a position."

After Broderick misfired, Terry shot back and shouted, "The shot is not mortal; I have struck two inches to the right." Broderick lowered himself, and then keeled over. He was taken by wagon to a friend's home, and died three days later, on Sept. 16.

"The sad intelligence was immediately conveyed to the city, and produced a deep and settled gloom on the community," reported the San Francisco Herald. Thousands of people came to his funeral. He was the only senator to have died in a duel.

Terry was tried for murder but quickly acquitted.

"Very few duelers were ever convicted of murder," said Charles Fracchia, founder and president emeritus of the San Francisco Museum and Historical Society.

Terry left politics and joined the Confederate Army. In 1889, after striking Supreme Court Justice Stephen Field, who once served with Terry on the California Supreme Court, Terry was shot and killed by Field's bodyguard.

Williams wrote that although Broderick had a history of not backing down from a fight, he had tried to avoid the duel with Terry. But had he refused the challenge, he would have been seen as cowardly.

"At the time, dueling was illegal but was tolerated by a large segment of the public, which accepted it as a part of the world of politics," the biographer wrote.

But others were horrified by the practice. On the day of the duel, the San Francisco Bulletin editorialized: "We cannot refrain from indulging, once more, in some expressions of sorrow and disgust at the barbarous practice of dueling which still seems to be tolerated among us."

Dueling, which had been mostly a southern tradition as a way to defend a man's honor, pretty much died out in this country after the Civil War.

"There was enough bloodshed," Ritchie said.

Museum of the City of San Francisco: http://tinyurl.com/lns9u8

Underratted Gettysburg book gets its just due

July 2 and July 3 1863 seem to get their just due in several books which means that July 1st often gets overlooked. Historian Harry Pfanz has written an excellent book that focuses on the first day of the battle but its recent publication overshadows David G. Martin's 1995 publication Gettysburg July 1. Although Pranz does an excellent job (he always does) Martin's book details the battle on July 1st in greater detail and provides even more insight on the combat. A review on Amazon.com accurately describes the book as "Martin's Gettysburg, July 1 is now the standard source for the first day's fight." -- Civil War Regiments.

Perhaps the best thing about this book is the way that Martin is able to cover the micro and macro parts of this epic contest that began early on July 1st. Amongst its 736 pages are three extra chapters which provide the reader with the usual Order of Battle and two other interesting additions. Appendex 2 is an outstanding account of the topography of the first day's battlefield and of the road network surrounding Gettysburg. The third appendex is a brief but good overview of the weather leading up to and during the battle. Both Appendex 2 and 3 are a must for any Gettysburg buff.

The maps of this book are unique. Most Gettysburg books use the same maps but Marting goes a step further. The maps are of two kinds: a "situation" map showing the position of the troops at a given point in time and an "action" map focusing on an incident of the battle. Perhaps the biggest reason that so many authors have avoided writing a book that just focuses on day one was the fateful decision of Richard Ewell to avoid any further entaglements with the Federals after they had been repulsed to Cemetery Hill/Culps Hill. I don't want to reveal everything that Martin talks about but his analysis/opinions shift the blame off Ewell's shoulders. I won't say where he places it but I am sure that you can take a guess. I highly suggest that you read this book for yourself and make your own descision. Again it isn't as recent as Pfanz's book but is superior to that work in so many ways. Highly recommended.
Posted by Mike at 9:45 PM No comments: Robert E. Lee
Originally uploaded by doxadigital
My next goal is to see Richmond and R.E. Lee
Posted by Mike at 9:31 PM 1 comment: