Forgotten Battles of the Civil War: The Battle of Perryville, October 8, 1862

During his Confederate military career Private Sam Watkins would fight at; Franklin, Nashville, Lookout Mountain, Missionary Ridge, Chickamauga, Stones River and the battles for Atlanta. Somehow, Mr. Watkins would survive these horrible battles and he would immortalize them in his postwar memoirs. With that experience in mind Watkins would write the following about the lesser known Battle of Perryville.

"Such obstinate fighting I never had seen before or since," wrote Confederate Private Sam Watkins on the Battle of Perryville. "The guns were discharged so rapidly that it seemed the earth itself was in a volcanic uproar. The iron storm passed through our ranks, mangling and tearing men to pieces… Our men were dead and dying right in the very midst of this grand havoc of battle."

On October 8, 1862, Watkins along with 18,000 Confederate troops clashed with just over 20,000 Union solders on the hills outside Perryville, Kentucky. Nearly 7,500 men were killed or wounded in the largest battle to ever take place on Kentucky soil. Why are many historians calling Perryville the “high water mark of the Confederacy in the Western Theatre? Today, my Forgotten Battles of the Civil War Series will explore the neglected Battle of Perryville, the facts surrounding it and its overall implications for both sides.

In mid-July 1862 Confederate Generals Braxton Bragg and Edmund Kirby Smith met in Chattanooga Tennessee to discuss strategy. Union General Ulysses S. Grant’s victories at Fort Donelson and Shiloh had lowered southern morale and effectively placed the momentum on the northern side. Both Smith and Bragg wisely concluded that to regain momentum and lost territory something drastic and aggressive had to be done.

They decided on a “two-pronged” invasion of Kentucky and their strategy sought to achieve two important goals. First, Kentucky was a border state that sent an equal number of troops to both sides during the war. Bragg and Smith hoped that invading the Bluegrass State would muster more troops to the dwindling western Confederate armies. Secondly, an invasion would draw Union forces out of Kentucky and a rebel victory would give control of the Western Theatre back to the men in butternut. They agreed to move north to Knoxville, Tennessee and begin their invasion on August 14.

Both Bragg and Smith couldn’t have asked for a better beginning to their plans. After splitting up into their “two-pronged” invasion both generals achieved some successes. Bragg captured a Union garrison at Munfordville and Smith defeated Union forces in a small contest known as the Battle of Richmond. Within a few weeks the Confederates had captured the cities of Lexington and Frankfurt. Moreover, troops under Bragg controlled the vital railroads that linked the important Kentuckian cities to one another. Things were looking really good for the rebels because they were controlling most of Kentucky and were threatening to conquer the entire state. Also, Confederate forced under Henry Heth had pushed some 35 miles south of Cincinnati causing fear to spread throughout that Ohioan city. 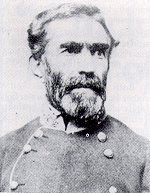 These successes didn’t go unnoticed by the Northern side. Union General Don Carlos Buell, commander of the Army of the Ohio, moved his 20,000 troops from Nashville to Bowling Green, Kentucky. Buell wisely asserted that he needed to defeat Bragg first in order to regain control of the railroad and he ordered an advance to Munfordville.

The men on both sides were equally put off by the draught that occurred within the area. The first casualties on both sides resulted from the want of water. A Union colonel wrote “we passed two men lying on the roadside having died from sunstroke.” Even the mighty Chaplin River was running dry and the heat was unbearable for the men as they lumbered towards the Perryville area. In fact the battle itself began as a contest over water. Everyone remembers Gettysburg as a clash over shoes and this battle would begin under similar circumstances.

On October 7, Arkansas troops moved west of town to secure the water in the area. At the same time a Union reconnaissance expedition reported that water was available west of town. Buell ordered troops under Brig. Gen. Phillip Sheridan to the area to control this valuable resource for the Federals. Also, the heights overlooking the area (known as Peter’s Hill) were also sought by the men in blue. Around 3:00 a.m. on October 8 Sheridan’s forces clashed with the Arkansas troops. The Battle of Perryville had begun.

Braxton Bragg unwisely believed that the Union forces that opposed him were smaller than his own. He felt that most of Federal forces had concentrated near Frankfort and he felt that a quick victory was achievable at Perryville. Sensing the momentum on his side Bragg ordered his 16,000 men to attack the 22,000 Union soldiers on his front. At 2:00 p.m. on October 9, Confederate forces under Major General Ben Cheatham crossed the dry Chaplin River and attacked Maj. Gen. Alexander McCook’s forces who had taken up a strong defensive position on a bluff. The rebels took heavy casualties but managed to force McCook’s men back by rolling the Union flank.

Meanwhile, the rest of the Confederate army struck the Union center and right flanks respectively. The troops attacking the Union center were under the command of Thomas Jones and John C. Brown. Rebel general Simon Buckner was in command of the Confederates who attacked the Union right flank. The men under McCook were also forced back from these areas and it looked like a major Confederate victory was at hand. Forcing the Northerners back took its toll on the attackers. One Union soldier later commented that the numerous dead bodies showed that the rebels had been “severely punished” for their assault.

Fierce fighting continued when Federal forces reformed their battle lines to stop the Confederate advance. With their forces finally out in the open the Northern army began to take horrendous casualties. The 22nd Indiana infantry lost nearly 70% of its force as the men in blue began to fight for their survival. Some of the most forgotten and yet some of the fiercest hand to hand combat of the war occurred as the Union forces attempted to make their stand along several roads outside Perryville. The Federals managed to force the Confederates back in some places and General Sheridan even led a charge that saved the Army of the Ohio from destruction. At nightfall the bloodshed ceased ending nearly five hours of intense fighting. General McCook admitted that his force “was badly whipped.” During the night Bragg realized that the force opposite him was larger than he had originally thought. Moreover, his side had suffered terribly and he quickly ordered a retreat.

As Braggs men retreated that evening the men in gray could only claim a hollow victory. Tactically they had won the Battle of Perryville by easily whipping McCooks force. However, the strategic victory belonged to the Northern side because Bragg was forced out of Kentucky as a result of this battle. With the invasion ended, Southeners could find little refuge in tactical victories. Sam Watkins would later write that both sides claimed victory at Perryville but in reality both sides were thoroughly whipped.

The Battle of Perryville had further ramifications than strategic or tactical victories. The casualties on both sides amounted to nearly 7,500 men (US 4,211; CS 3,196). Like most Civil War battlefields the victors were confronted with a scene of death and destruction. One Federal commented on the battlefield “It was a horrible sight, for four mile the fields are strewn with the dead of both parties.” As surgeons and burial details tended to the wounded and dead respectively the stench of death continued in the city of Perryville. In fact, the last recorded death as a result of the battle occurred on March 23, 1863. That date was nearly nine months after the battle.

Many historians called the Battle of Perryville the “high water mark of the Confederacy in the West.” The invasion would be the first and last time that a Confederate army would enter Kentucky. With the area secured, the North was able to use it as a jump off point to eventually secure Tennessee which in itself would serve as a jump off point to capture Atlanta. Ironically Bragg and Smith had planned their invasion in Chattanooga and that city would be the same place that Sherman would begin his Atlanta Campaign.

Today the battlefield is home to one of the most famous and best Civil War reenactments. More information can be found at the following webpages.