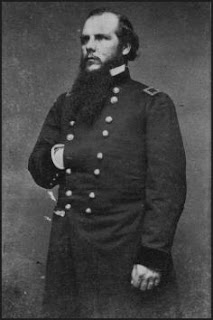 He fought in all three theatres of Civil War combat (Trans-Mississippi, Western and Eastern theatres), commanded the entire United States Army in 1888, superintendent of West Point and proposed that Pearl Harbor be used as a naval base. So who was John McAllister Schofield? Today he becomes part of my Forgotten Generals of the Civil War series.

The future general was born in Chautauqua County, N.Y. on September 29, 1831. Ironically the town of Schofields birth is just 94 miles from my hometown. His father, a Baptist clergyman, moved his family to Freeport, Ill. in 1843. After a public school education, John became a surveyor in northern Wisconsin and served as a public school teacher. In 1849 he was offered an appointment as cadet at West Point and the ambitious young man finished 7th in his class in 1853. His first assignment was at Fort Moultrie, S.C. and after a brief time there he received his commission as second lieutenant in the 1st Artillery. After monitoring Seminole Indians for a while he was ordered to West Point to serve as a professor of natural and experimental philosophy. It was during this time that Schofield married Harriet Bartlett, daughter of one of his superiors and the two would remain married until her death in 1889.

In 1860, Schofield received word that a teaching position had opened up at Washington University in St. Louis. The motivated Schofield applied, was hired and moved his family to Missouri. It was during this time period that the nation was moving towards Civil War and both North and the South began to muster regiments. Having a military background made Schofield an important commodity and he received a commission as major. His first assignment was to organize and muster the 1st Missouri Volunteer Infantry.

His standing at West Point and subsequent assignments caught the eye of General Nathaniel Lyon who made Schofield his Chief of Staff. On August 10, 1861 both Lyon and Schofield saw their first battle at Wilson’s Creek, Missouri. During the contest, General Lyon was killed. John Schofield won the Congressional Medal of Honor in 1892 for his service at Wilson’s Creek. His citation for that award reads “Was conspicuously gallant in leading a regiment in a successful charge against the enemy.”

From there Schofield moved up through the ranks, first as Captain of the 1st Missouri, then colonel and then in November 1861 he became a brigadier-general. General Schofield held various territorial commands until the autumn of 1862 when he was given command of the “Army of the Frontier”. He assignment was to monitor Confederate operations in Missouri this put Schofield in a boring, uneventful position. But soon history would call the young general into action.

After serving for a time as the commander of the Department of Missouri, Schofield was promoted to Major General in February 1864. His new assignment was commanding the XXIII Corps and the Department and Army of the Ohio. General William T. Sherman utilized Schofield and his men during his famed Atlanta Campaign of 1864. “Uncle Billy’s” men pushed Confederate General Joe Johnston to the outskirts of Atlanta and eventually whipped his replacement, John Bell Hood who later surrendered control of the city to Sherman. When Sherman began his famous “March to the Sea” he placed General George H. Thomas in command of all the troops in the west. The XXIII Corps was one of his commands.

During the Nashville Campaign, Confederate General Hood was easily defeated at Franklin and Nashville. Schofield performed brilliantly at Franklin, which badly shattered Hood’s army and inflicted over 7,000 casualties on Hoods dwindling army. John helped Thomas finally destroy Hood’s army at Nashville and was awarded a regular army promotion to Brigadier-General in November 1864. By the end of March 1865 he earned another promotion to Major General. The XXIII Corps was moved by rail to Washington and then assigned to the newly formed Department of North Carolina. With this force he occupied Wilmington, N.C.> and joined Sherman at Goldsboro, N.C. on March 23, 1865. The combined force under Sherman eventually forced the surrender of Joe Johnston and the Army of Tennessee. During the surrender, Schofield acted as commissioner for execution of the surrender. He was given command of the Department of Virginia when the area was designed under President Andrew Johnson. 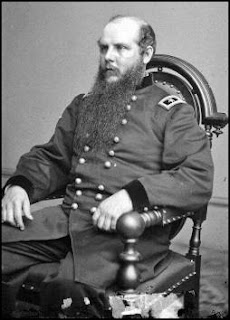 After the war he served as Secretary of War under Andrew Johnson a post that he only held for a brief time. Despite the lack of time he managed to organize a famed artillery school at Fort Riley, Kansas and the United States Cavalry School. After several years of commanding the Department of Missouri and the Department of Pacific he spent three months in Hawaii. It was during this time period that he wrote a report upon the military value of the islands to the United States. It was in this paperwork that Schofield recommended the acquisition of Pearl Harbor as a naval base. The islands did become the key to the U.S. Pacific Fleet and became the target of the Japanese in 1941. The establishment of the navy in Hawaii served as our jumping off point to victory in World War II. Therefore, Schofield not only helped us win the Civil War but also aided in our victory in World War II.

From 1876 to 1881 he served as the superintendent of the United States Military Academy. While there he acted as the board president that reviewed the case of General Fitz-John Porter. General Porter was dismissed from the service by sentence of a court martial for misconduct at the battle of Second Manassas. The inquiry under John M. Schofield found that Porter was right in not committing his men to a doomed assault which Confederate General James Longstreet would have crushed. It further found that Porters actions probably saved the Army of Virginia from an even greater disaster.

Clearing Fitz-John Porters name wasn’t Schofields last contribution to history. In 1888, upon the death of Phillip Sheridan, he became the commanding General of the Army. This post was last held by Sheridan, Sherman, Grant and George Washington. In February 1895 he resigned due to his advanced age and ill health. His remaining years were devoted to a new wife Georgia Kilbourne, who he married in 1891 and publishing his memoirs Forty-Six Years in the Army. The book was published in 1897 and became one of the best military memoirs ever written. General Schofield fought and lost his last battle with death on March 4, 1906 in St. Augustine, Florida. He is buried in Arlington National Cemetery in Washington D.C.


http://www.mycivilwar.com/leaders/schofield_john.htm
Posted by Mike at 2:54 PM