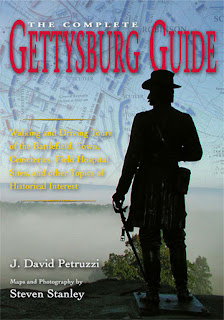 Since those warm days in 1863 the Battle of Gettysburg has had the ultimate distinction of having more books published about it than any other military campaign in American history. After the guns fell silent the men and women who partcipated in the battle published first-hand accounts which were ultimately followed by more secondary sources than most people can count. The battle has been disceted by authors for years and the publishing world has produced books solely based on the action on specific parts of the battlfield. For example, some authors have focused on the action on Little Round Top or the Wheatfield or the unfinished railroad cut or Pickett's Charge. The battle has also seen the publication of several tour guide books over the years which provide visitors with the opportunity to use them during their trips to the site. One would think that with so many books published on the subject that nobody could come up with anything unique but noted Gettysburg historian J. David Petruzzi & Civil War cartographer Steven Stanley have produced a book whose ownership is required by anyone interested in Gettysburg or the Civil War.

The book itself comes in hardcover and has an excellent dust jacket which depicts General Warren's statue on Little Round Top. The book is sturdy and purchasers will be happy to see that every page is on thick, glossy paper which should allow the user to use it on the battlefield. Also, the book is in full color and that makes both the locations and the information come alive for the reader. The book would not have the impact that it does if it was in black and white. This book is unbelieveable!

The book is the result of a perfect partnership between authors JD Petruzzi and Steve Stanley. The latter is a cartographer who creates maps for The Civil War Presevervation Trust. His maps are colorful, easy to read but very detailed. In all the book contains 70 maps and dozens of photos by Stanley which supplement Petruzzi's easy to read and detailed text. In fact, this book is not only a must for Gettysburg lovers but because the text is not overly detailed makes this a book that is easy to use on the battlefield or read on your armchair.

The contents of the book make the purchasing price seem ambigious. This book is worth every dollar that you will spend on it. First, it contains excellent introductions by Petruzzi, Stanley and Gettysburg Battlefield Guide Eric Campbell. Campbell also appears in Civil War Tours as a audio tourguide. Wisely the authors have a short section entitled "Helpful Hints for using the Guide" which briefly explains how the reader should use the book and encouragers vistors to the Gettysburg battlefield to get out of their cars and walk the grounds. You can easily tell that both Stanley and Petruzzi love this campaign, the fields on which it was fought and are passionate about educating people about the battle.

Another wise thing that Petruzzi did a nice 8 page overview of the entire Gettysburg campaign. This is a wonderful addition because newcomers to the battle will find it very interesting and it allows them to quickly educate themselves on the situation that both Meade/Hooker and Robert E. Lee faced from the day the campaign started to the last rebel crossed the Potomac River. Also, this overview is written so well that Gettysburg experts will find it a worthy read.

The bulk of the book contains 11 seperate tours of the Gettysburg battlefield and other surrounding areas. The first tour takes the readers to the site of a little known and overlooked skirmish between Confederate cavarly and the 26th Pennsylvania Milita. Chapter 2-3 take the readers through the key stops on July 1-3 1863. Like all the tour chapters, each stop on the tour is detailed and almost always a photograph is included. Stanley's excellent maps and photos support Petruzzi's writings and both keep the readers interest. The next three tours deal with the caverly action around the Gettysburg battlefield which includes the sometimes overlooked East Caverly Battlefield, Hunterstown and Fairfield.

The seventh tour in the book takes the readers to the imporant sites in the town of Gettysburg area. These historical sites include but are not excluded to the town square, the Gettysburg rail station, Thaddeus Stevens' office, the imfamous "Jennie" Wade House and the Harvey S. Sweney House which is now known as the Farnsworth House. In all the town tour has 22 stops and all are detailed by Petruzzi.

The next two tours bring the readers into two cemetarys. The first is a tour of the Soldiers' National Cemetery and the second is a tour of the lesser visited Evergreen Cemetery. Some of the fascinating graves that the authors discuss are the graves of James Gettys (founder of Gettysburg) and the Gettysburg Civil War Women's Memorial. Another interesting stop is the gravesite of Gettysburg resident Edward Stewart Plan who is a member of the Professional Baseball Hall of Fame. In all the Evergreen Tour is 37 exciting stops. Petruzzi also points out the actual location of the Speakers' Platform that was used for the Gettysburg Address. Of course the graves of "Jennie" Wade, Jack Skully and John Burns are also included.

A truely intriguing addition to the book is 21 stop tour of the battlefield's rock carvings. According to Petruzzi he included this section to catch the interest of vistors who tend to focus on the main parts of the battlfield and "often miss" the "out-of-the way locations. Many soldiers carved their names on the battlfield to point out the fact that they were there and in several cases the reader will have to leave their car to explore them. I cannot think of any other publication taht includes a review of these sites. One of the more interesting carvings to me is a 1889 carving by a member of the 143rd Pennsylvania on McPherson's Barn. For each carving Petruzzi includes the offical location, easy to follow directions and never before published photographs of each.

The owner of this book will have a series of excellently written tours. It will stand up to repeated use and it will be the final say on Gettysburg Tour books for years to come. If you own other Gettysburg Tour books you may want to toss them out because the Complete Gettysburg Guide is all you will ever need! Any Gettysburg enthusiast will be happy with this book. Although one could be a nitpicker and point out things that should have been included I highly doubt that you will ever find anything better. If you are interested in learning about Gettysburg then you must purchase this book.

The books webpage is located at: http://www.completegettysburgguide.com/about.htm
Posted by Mike at 4:16 PM