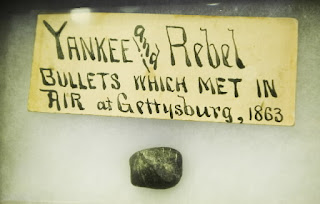 In Gettysburg a recently opened museum called the "Gettysburg Museum of History" opened recently and hosts over 4,000 arifacts. One of the interesting items is a pair of bullets that met in mid-air and merged. (see picture). The museum is free and opened just three weeks ago and one week after I visited the area in late July 2009. The currator of the museum has ancestors who farmed much of the area where Pickett's Charge took place and as he dug up things during his work he kept them and past them down to his decedents.

According to an 1887 newspaper account that Dorr (the museum manager) located, Pfeffer discovered a burial trench with the bodies of seven Confederate soldiers located near what is now the 12th New Jersey monument. Dorr said his great-great grandfather kept buttons and other momentos from the bodies, then re-buried the bones.

I have to say that I am very disappointed that this didn't exist during my visit to Gettysburg. I guess that it is another reason to go back.
Posted by Mike at 9:08 PM No comments:

Little Round Top from the 11th US Monument Just sharing a great link concerning the battle of Wilsons Creek which was the second major battle of the war and the first major battle in the western theatre.

A while back I mentioned Wilson's Creek in my Forgotten Generals of the Civil War series. Check out John Schofield.
Posted by Mike at 5:37 PM No comments:

Book Review #12 "The Myth of Little Round Top" by Garry E. Adelman

Since my Gettysburg trip is still in the recent past I figured that my next book review should focus on a Gettysburg book. Remember reading your history and learning that if the Confederate army had succeeded in carrying Little Round Top then they would have won the battle? Author Garry E. Adelman states that this version of history is false and he wrote a 100 page book to discuss his views and thesis.

If i revealed Alderman's viewpoints then it would ruin the book for you so instead I will focus on what you get with the book which is modestly prices at $12.95. Adelman incudes three appendix which will be my focal point here. The first appendix is the sterotypical Order of Battle for both sides during the battle. That is usually in every Gettysburg book so I will not speak anymore of it. The second appendix includes the casuality list for those regiments who were engaged at Little Round Top on July 2, 1863. Incuded are the number engaged, killed, wounded, missing, totals, and % Lost.

The third appendix is awesome. Standing alone the third appendix is worth the purchase if you are interested in this part of the battle. In this appendix, Alderman lists the major primary and secondary sources in what he calls a "historiography of Little Round Top". This includes a chart of one hundred or so sources written about the struggle for that rocky hill to show how the views of Little Round Top has changed over the years. The list is chronologically through time, by type of source the manner of importance placed upon Little Round Top by the author. You can see how each source explains the importance of Little Round Top. Its great stuff and should you get the opportunity to purchase this book it is highly recommended.

As a final note, his reasoning for the myth is broken in chapter one with a history of fight for Little Round Top, the second chapter explores the Legend of Little Round Top and how it grew ove the course of the latter part of the 1800's and the early 1900's. The final chapter deals with the military analysis of Little Round Top and what would or could have happened if the Confederates had taken that hill. the answer to that question might surprise you. If you get a chance purchase Garry E. Adelman's "The Myth of Little Round Top".
Posted by Mike at 9:02 PM No comments:

Friend to a Friend Monument Friend to a Friend Monument
Originally uploaded by madnessmike
Back when I visited Gettysburg in 1986 and 1989 the "Friend to a Friend" monument was not yet built. I was really happy to see it during our 2009 trip to Gettysburg. I thought I'd share this pic with everybody because it is a great view of this monument.
Posted by Mike at 9:52 PM No comments:

Little Round Top after 20 years 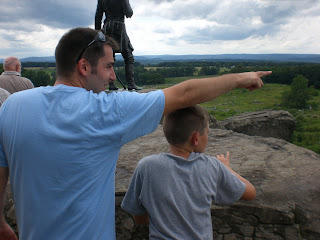 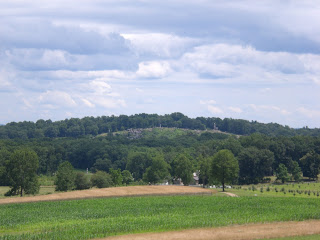 Its been 20 years since I walked the hill of Little Round Top. I know that historians today have researched the fact that the drama that unfolded on that rocky hill in July of 1863 is overrated and overshadows the situation that occurred further north at the Peach Orchard, The Wheatfield, Devils Den and the lower part of Cemetery Ridge. But as I have written in earlier blogs (Blog 1 & Blog 2) I love Little Round Top. I still believe that it was the most important part of the Gettysburg battlefield regardless of its importance being overrated.

As you may know I travelled to Gettysburg last week and enjoyed the town and the battlefield. Pics and a blog about it will be coming soon. Stay tuned!
Posted by Mike at 10:34 PM 2 comments: