Forgotten Battles of the Civil War: The Battle of Richmond, Kentucky Aug. 29-30 1862 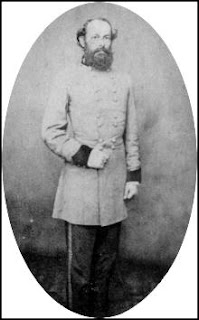 The goal of this series is to point out to the reader that so many Civil War battles are forgotten. The Battle of Richmond, Kentucky is no exception to that rule. What amazes me is that the battle was the most complete southern victory of the war and yet when you think of the Battle of Richmond you feel that Virginia is being discussed.

The battle was the second largest Civil War battle in Kentucky. One of the things that intrigued me was the opinion of many historians who refer to the battle. They state that it was the most decisive and complete Confederate victory of the entire war. When I heard about this I thought “Bigger than First Mannasas or Chickamauga?” After studying the battle in preparation for this blog the answer to my question is “yes”.

Like the Battle of Antietam this battle was really three battles. Kingston, Duncannon Lane and in the Richmond Cemetery were these three theatres of combat. In midsummer of 1862 the Confederates sought to rebound from their disastrous defeat at Shiloh. Regaining control of central Tennessee and Kentucky was vital to the Southern cause and Confederate Generals Braxton Bragg and Kirby Smith knew this to be true. Smith moved 19,000 men from Knoxville toward Cumberland Gap. Meanwhile, Bragg moved 30,000 men from Chattanooga to central Tennessee in preparation for his invasion of Kentucky. The idea of two large invasion forces was logical one and it brought the South an important victory which was unexploited. 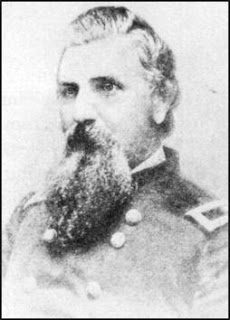 As Smiths men marched into Kentucky the rebel cavalry under the command of Col. John S. Scott routed a small Federal force on August 23. Untrained and undisciplined Union forces stationed at Richmond, Kentucky were under the command of Brig. Gens. Mahlon D. Manson and Charles Cruft. The overall Union commander in the area was Major General William (Bull) Nelson who ordered Manson to move his forces from Richmond to Lancaster. Unfortunately, Manson didn’t receive Nelsons message and many Union soldiers would pay for this error.

Instead, General Manson moved his men toward Rogersville (just south of Richmond) and this placed him in the path of a rising Confederate commander named Patrick Cleburne. Brigadier General Patrick Cleburne was an Irish immigrant who had just begun to show the qualities that would earn him the title “Stonewall of the West”. He was a smart, gifted fighter who had the complete confidence of his men and fellow commanders. William Hardee once said “When his division (men) defended, no odds broke his lines; where it attacked, no numbers resisted its onslaught.” The Battle of Richmond would become the proving ground of “Old Pat”, as his men affectionately him.

On August 29, 1862 Cleburne and Manson skirmished and the confederate commander pulled his men back to wait for reinforcements. By this time Gen. Smith had arrived on the battlefield and instructed his aggressive, Irish general to wait for Brigadier General James Churchill’s division to arrive.

As the Confederate assault began Manson noticed that Cleburne was attempting to turn his right flank. To counter this, Manson moved men from his center and left flank to reinforce and extend his right flank. This was a wise move but it weakened his lines elsewhere and the ever aggressive Cleburne quickly took advantage of Manson’s miscalculation. As the entire rebel line advanced, with cavalry attacking Manson’s flanks, General Cleburne was wounded. As he rode around the field directing his men and giving orders a rifle ball entered his left cheek, shattered his lower teeth without touching the bone and passed out through his open mouth. Cleburne was carried from the field and would survive to fight another day.

Meanwhile, General Manson and his men were in desperate trouble. The rebels were hitting him all along the line and his left/center, weakened by reinforcing the right gave way. Within minutes the entire Union line disintegrated and the men in blue began to run. The Federals were routed and the men in butternut nipped at their heels for four miles. As Nelson arrived on the field, Federal troops fell back in disorder to the edge of Richmond. Nelson rallied 2,200 men just south of the town, but three volleys from a wide Confederate advance broke this defense. Scott's cavalry rode west to cut off their retreat, and virtually all of Nelson's army was captured. The Battle of Richmond was over and the Union army was completely defeated.

The battle itself was a disaster for the North but when one glances over the causality list you get a sense that the battle is unlike any other Southern victory. The Confederates had fewer causalities (killed, wounded, captured, missing) than their foe. When you take into account that the south was the attacker these numbers become even more fascinating.

General Nelson’s loss was 206 killed, 844 wounded, and 4,303 missing, for a total of 5,353. Smith’s loss was 98 killed, 492 wounded, and at least 10 missing, for a total of 600. Supporters of the South couldn’t ask for a more complete victory from a tactical standpoint but in the end it went unexploited. Failure by both Bragg and Smith to coordinate their forces in the campaign that ended at Perryville made the Kentucky offensive a Southern defeat. But that was in the future and the Battle of Richmond paved the way north for the marching rebels. Even though victory would come again to the Union, this defeat was more complete than any other Union setback of the entire war. This includes Chickamauga, First Bull Run, Fredericksburg, Kennesaw Mountain and Chancellorsville.

More information on this battle can be found at


A book on the battle can be found here, it looks really good.